Our interns, Jacob, Laith, Louise, Alex, Jaskirat and Tom worked fantastically as a group for 8 weeks to create an innovative data collection solution called TheatreCapture.  This involves two streams of data collection.  First, they created an app that scans various codes to record information about the patient, location, and any medical implants, which can then be stored in the cloud.  Then clinical data was streamed from the anaesthetic machine using a Raspberry Pi. This means that vital statistics, such as heart rate and oxygen saturation levels, can be linked to the patient data in the cloud, which can be used to create a clearer picture of theatre activities.

Our 2021 internship programme was the first time our interns all worked together collaboratively in the office on a team project.  We had daily stand-ups and regular Problem-Based Learning meetings to keep the project on track and the team all on the same page.  Feedback from interns and other employees alike was very positive, and the atmosphere in the office was buzzy and exciting, with the teamwork aspect often being cited as the best part of the project.

What did the interns work on?

The interns split up into smaller teams to work on different aspects of the TheatreCapture prototype:

We were able to procure an anaesthetic machine which we set up in the office and Noo, our Intern Tech Lead and Tim, our tech consultant, worked to get it up and running and start getting data out.  They initially tried communicating with the machine using binary messages on python, then found some open-source C# code which queried the machine and read the binary files.  Once they had the correct null modem cable, they were able to communicate with the machine and start looking at the data. 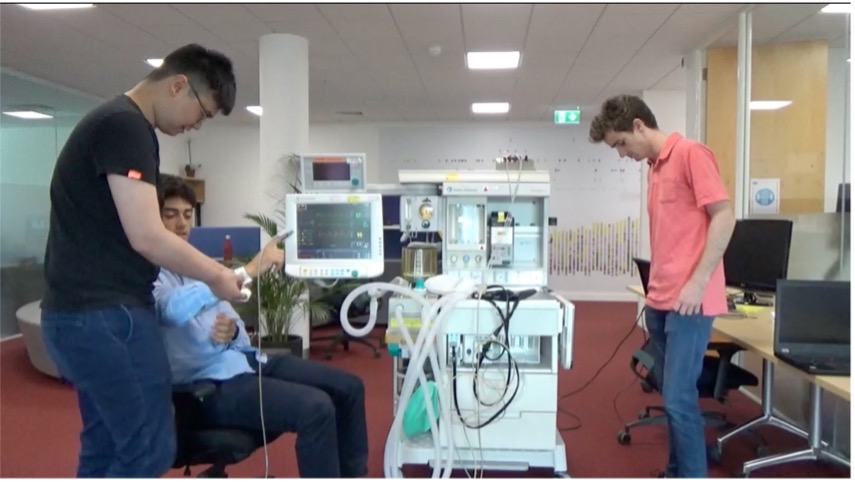 The process of creating the app was very collaborative, with everyone having some input in the final product.  The interns had many group meetings to discuss the exact functioning of the app and what should be included in our Minimum Viable Product, down to details such as what colour the buttons should be.  Jas and Louise produced the first storyboards of the app using Miro and inVision to visualise the order and navigation, and Jacob set about coding it in React Native.

By week 4, Jacob was working on scanning GS1 codes and barcodes.  At this point the app was purely a scanner.  It displayed the data encoded in the data matrix in a pop up but didn’t send it anywhere.  By week 6, the interns decided to add a “top sheet” and “bottom sheet” to allow the camera to be visible in the background while the user can see what has been uploaded. From week 6 onwards, Jacob, Alex, Laith and Tom worked on adding in the Bluetooth communication and further developed the back end of the app and the user interfaces with Jas and Louise to make them more accessible and intuitive to use. 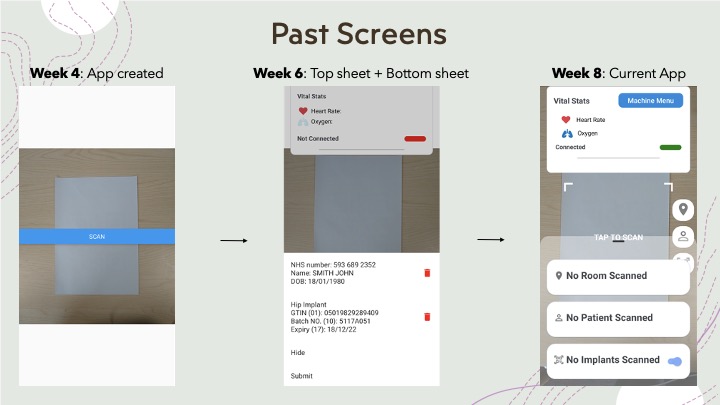 Sending anaesthetic data to the app

For the anaesthetic data to be attributed to the correct patient, there must be a link created between the Raspberry Pi connected to the back of the machine, and the app, which holds the patient data from the scan of the patient wristband. 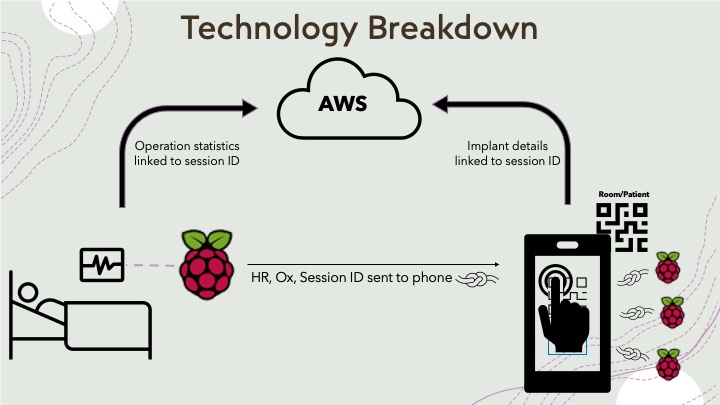 Tom and Noo focused on establishing a connection between the app and the anaesthetic machine’s Raspberry Pi and sending data to the app using the Raspberry Pi.   The interns settled on using Bluetooth GATT (Generic Attribute Profile) to make the connection since it allows for lots of data to be sent.  Tom, Laith and Alex worked to create a list of nearby machines in the app, which were ordered by proximity, allowing the user to select the nearest machine. To do an additional check, they managed to send the heart rate and O2 saturation from the machine to the app to allow the user to do a visual match between app and machine, ensuring that the data will be linked to the correct patient. The ‘name’ of the Pi was added later as another check.

Sending data to the cloud

Tom worked on sending the data from the anaesthetic machine and app to the cloud with Noo’s help using Amazon Web Services.  Data was sent in the form of MQTT messages which get put into AWS DynamoDB via a message broker.  By week 8, we could see the anaesthetic data updating in the database in real time. This could be clinical valuable and also potentially support more efficient use of resources by tracking operating theatre use.

Jas and Louise did a fantastic job of bringing the project into the real world, by looking at the viability of the project from a business standpoint.  They created a value proposition canvas to explore the wider context and the ‘customer’ tasks, gains and pains for trying to record patient implant and anaesthetic data, which helped guide the team in the formation of their MVP.

They were also responsible for the branding and marketing side of the project, and produced the name, logo, and pitch video from scratch. 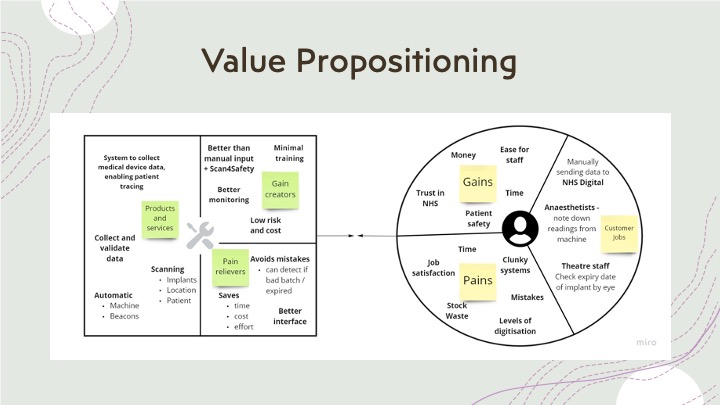 With the summer over and internship concluded, the interns have left us with a remarkable prototype. Over the next year, we hope to continue their work and are aiming to eventually bring TheatreCapture into hospitals in the NHS.

TheatreCapture has many exciting implications which we could explore further.  The interns discussed a ‘warehouse mode’ for the app where hospitals could stock check their implants and flag faulty or expired implants.

Despite challenges presented by Covid, this project was a remarkable success, and the interns came together and worked incredibly well as a team in the office.  We found that having a multidisciplinary team was really valuable, since the interns were able to explore the problem from many different angles and produce something that is more complete and viable as a prototype.  Each intern was able to find areas they enjoyed within the project, and the regular stand-ups kept everyone on the same page.  We plan to continue with the team project structure in future years. 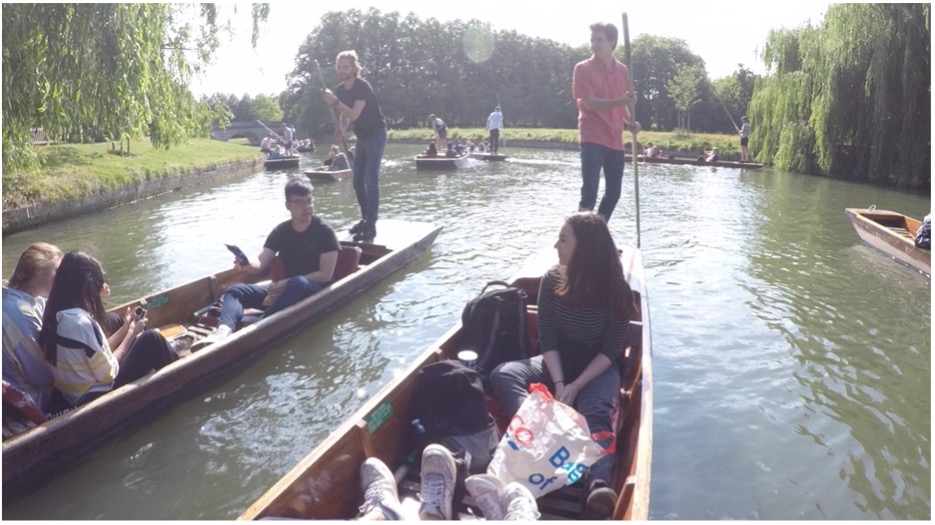 This is "AppDemo_v4_1.mp4" by Health Data Insight CIC on Vimeo, the home for high quality videos and the people who love them.

This is "Internship_Experience" by Health Data Insight CIC on Vimeo, the home for high quality videos and the people who love them.

Read more about our Fellowships.